Reasons to Upgrade Your Desktop to an iMac 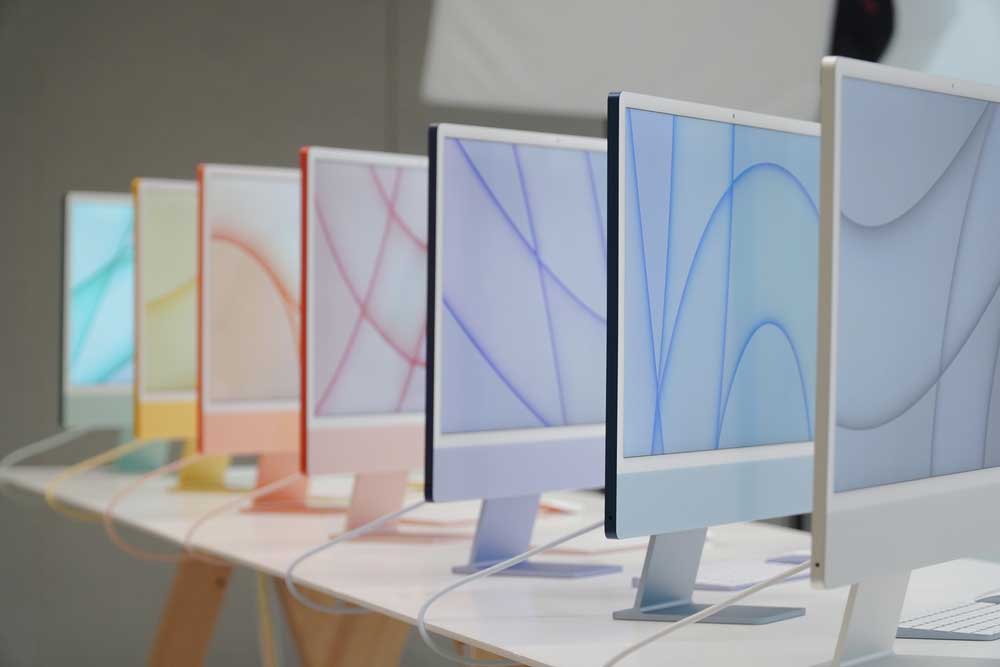 Earlier in May this year, Apple released the latest successor, the 24-inch iMac powered by its proprietary Apple Silicone M1 chip. Highly anticipated by many, this version of the iMac sports a sleek form with an unparalleled processing power for work and play.

Previous iterations of the iMac released in 2020 featured 10th generation Intel chips in both the 21.5-inch and 27-inch models. These third-party chips in Apple’s flagship desktops were markedly slower compared to the competition and were the main sources of criticism for many, citing Apple’s use of previous-generation hardware as a lacklustre component of design.

Side by side, the M1 iMac leaves its predecessor in the dust in both utility and construction. Significantly slimmer and cheaper, the M1 iMac also comes in a variety of colourways - available in blue, green, pink, and silver for models with 8GB of RAM, with the additional colour options of orange, purple, and yellow for the models built with 16GB of RAM.

The New and Improved iMac

The first system on chip solely produced by Apple, this groundbreaking improvement boasts up to 85 per cent faster CPU performance and up to two times faster graphics performance than standard 21.5-inch iMac models of previous years powered by Intel chips. This performance is exemplified even further when running applications that were built to optimise around the M1 chip. Creatives that work around design or content production daily will be happy to know that the benchmark numbers on the 2021 iMac blow its predecessor out of the water. For example, when rendering footage the M1 iMac cuts through delay like a hot knife through butter, and yes that even extends to 8K video resolution editing.

On top of the new upgrades to the iMac’s internals, Apple also casually threw in a 4.5K retina display for the monitor. With True Tone technology which adjusts the colour temperature automatically to suit the ambient light, Apple really had the M1 iMac made with workflow in mind. Countless hours spent staring at the screen might feel less strenuous given this improvement, and we’re all the more thankful for it.

In addition to all that, the final hardware upgrade comes in the form of a massively spec-ed up sound system. Given its slim form factor, many critics were concerned that the M1 iMac would sacrifice some of its utility for design. These fears were further compounded when Apple went so far as to say that the M1 iMac had the “best sound system ever in a Mac”. Thank goodness Apple delivered on their promises - the M1 iMac is stocked with four vibration cancelling speakers which are steadied with a high-performance tweeter. What results is a detailed backdrop for work and play, which elevates movies, music and any other content you might view to another level.

Why Upgrade to an iMac?

For those considering switching up to an iMac, a big reason for that might be the M1 processor’s hybrid configuration. Unlike the Intel and AMD chips most systems run on, the M1 chip delegates work extremely efficiently. An 8-core processor in the former might boast an equal number of “okay” cores, but the M1 chip enhances workflow by assigning tasks to four extremely fast cores and four lower-powered high-efficiency cores. This allows the M1 iMac, and by extension all other M1 devices, to deliver arguably the best performance-per-watt in the world. We can also generalise it to mean that M1 devices are nearly unbeatable in single-core workloads.

The shift towards Apple-based internals in the form of the M1 chip signifies the start of a new era in personal computing. Apple's fans have long waited for this moment, and those on the fence might find a serendipitous product if they make the leap.